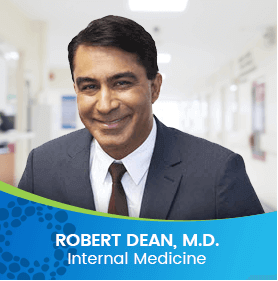 Robert Dean, M.D. is Board Certified in Internal Medicine. Since 1997, Dr. Dean has helped patients in clinical practice and has given numerous talks at various medical conferences. He has traveled around the world with the Starkey Hearing Foundation helping to give the gift of hearing. Treated post-travel illnesses at the Tropical Medical Clinic and collaborated on research in women with HIV in Mexico City. Robert Dean, M.D. recently brought his knowledge and passion to the small screen as creator, writer and host of a new TV show titled Cures for Mankind. In this show, he explores the rainforest to find little-known and often dangerous plants and animals that are the source of many life-saving medications. His non-profit of the same name is dedicated to the preservation of Natures Treasure Trove.

Robert Dean, M.D. was voted one of the Top Doctors in Florida in 2001 by his peers and has been in practice for over 20 years. He is known for his ability to simplify conditions and treatments from confusing medical jargon for his patients.

“My name is Frank and this is my story. My right knee cartilage was gone. I was bone-to-bone. The pain was unbearable. I went to doctors and they wanted to do surgery they wanted cut out my knee. I didn’t want to go that way. ARO changed my life. I had the procedure done and now I’m riding, no pain. It’s like I started a new chapter in my life. It’s a miracle, it really is that I’m back cycling. It’s like my dream come true.”

Call For A Free Consultation

*Our X-ray or MRI review is an informational review of the X-ray or MRI report that you provide to us and is not a form of diagnosis. A diagnosis and a final determination of whether you may benefit from treatment at AROmotion can only be made after you have been physically examined by our medical doctors. The X-ray or MRI Review has no value and will not be billed.

**Results from the procedure may vary for each individual and recovery period depends on the patients adaptation of the treatment. Disclaimer

Thank You - You Are Subscribed!

Please check your inbox for a welcome message from us. Don’t forget to check your spam folder and to whitelist aromotion.com to ensure you receive our email updates.

Thank You - You Are Already Subscribed!

We received your subscription previously, so you do not need to subscribe again. Please check your inbox for our Welcome Email, including your spam or junk folder and be sure to whitelist us so you receive our future email messages.

Get exclusive news, updates, and offers about our non-surgical alternative to joint replacement surgery as well as healthy living tips from our board-certified physicians.

By clicking Subscribe above, you are opting in to receive email communications from AROmotion. You may opt out at any time. Read our Privacy Policy here: https://aromotion.com/privacy-policy/