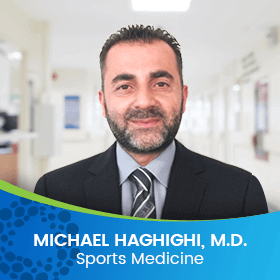 Michael Haghighi, M.D. received his undergraduate degree from the University of South Carolina in biology premedical while playing soccer. He graduated with honors from American University of the Caribbean Medical School which also included one of the years of medical school training in London, England with the Royal hospital system.

“My name is Frank and this is my story. My right knee cartilage was gone. I was bone-to-bone. The pain was unbearable. I went to doctors and they wanted to do surgery they wanted cut out my knee. I didn’t want to go that way. ARO changed my life. I had the procedure done and now I’m riding, no pain. It’s like I started a new chapter in my life. It’s a miracle, it really is that I’m back cycling. It’s like my dream come true.”

Call For A Free Consultation

*Our X-ray or MRI review is an informational review of the X-ray or MRI report that you provide to us and is not a form of diagnosis. A diagnosis and a final determination of whether you may benefit from treatment at AROmotion can only be made after you have been physically examined by our medical doctors. The X-ray or MRI Review has no value and will not be billed.

**Results from the procedure may vary for each individual and recovery period depends on the patients adaptation of the treatment. Disclaimer